The heat wave in western Europe continues to spark devastating wildfires on Sunday and is expected to continue into the start of the week, where it could break several temperature records in France and Britain.

This heat wave is the second in just one month in Europe. The multiplication of these phenomena is a direct consequence of global warming according to scientists, with greenhouse gas emissions increasing in intensity, duration and frequency.

In France, Greece, Portugal and Spain, fires have burned thousands of hectares, forcing thousands of residents and tourists to flee their homes, and last week killed several members of firefighting and relief services.

France: “In some areas of the southwest it will be a heat apocalypse”

In southwestern France, the mobilization of firefighters did not falter, particularly in Gironde, where almost 11,000 hectares of forest have gone up in smoke since Tuesday, in a context of widespread heat wave. Météo-France has put 15 departments in the west of the country on red alert”heat wave“, a sign of an extreme heat spike. Firefighters try to control a fire near Louchats in Gironde © AFP

Monday could be one of the hottest ever recorded in France. “The heat grows, the heat wave spreads across the country“warns the public meteorological establishment, which expects to see many temperature records broken, especially in the west and southwest.

Météo France recommends that the inhabitants of the areas in question observe a “absolute vigilance“in the face of”dangerous phenomena of exceptional intensity“.”In parts of the Southwest, it will be a heat apocalypse“which could reach 44° in some places on Monday, followed by a”hot night“, according to Meteo France.

At the moment, in the tourist basin of Arcachon (south-west), on the edge of the Atlantic Ocean, the progression of the fire has slowed down, although during the night from Saturday to Sunday “various sources of fire threatened the campsites of the Dune du Pilat, which had to be evacuated from their guards“, according to the Gironde prefecture.

In total, more than 14,000 residents and vacationers have had to pack their bags urgently since Tuesday.

In Spain, some twenty forest fires are still active and out of control in different parts of the country, from the south to the extreme northwest of Galicia, where the fires have so far destroyed some 4,400 hectares of land this week, according to authorities. 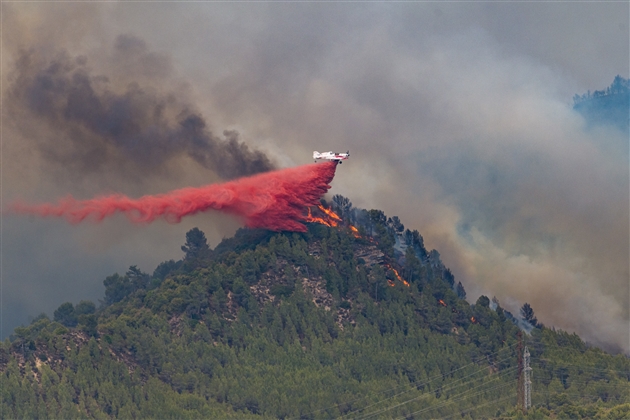 A bomber plane drops its cargo on a hill in Castellgali, near Barcelona © Zuma Press

In the far south, a fire has broken out in the mountains of Mijas, near the coastal city of Malaga, and has so far destroyed almost 2,000 hectares, according to local authorities. It caused the evacuation of more than 3,000 inhabitants, but since then 2,000 have been able to return to their homes. “we work all night“against the flames,” Agriculture Minister Carmen Crespo told Spanish public television.

I breathe in Portugal but the risk is still present

Portugal was experiencing a moment of calm: on Sunday, for the first time since July 8, temperatures there did not exceed 40 degrees, according to the National Meteorological Service (IPMA), after having reached a historical July record of 47 ° on Thursday. .

Calm also on the fire front: a single large focus, near Chaves, in the extreme north of the country, was considered active and “practically mastered“more than 90% of its perimeter according to the Portuguese civil protection.

However, almost the entire Portuguese territory presented a risk on Sunday.”maximum“, “very high” either “raised“to the fires, especially to the central and northern regions.

According to the latest known report from the Portuguese authorities, the fires of the last week have left two dead and around sixty injured. They have destroyed between 12,000 and 15,000 hectares of forest and brush since the start of the heat wave.

Further north in Europe, in the UK, the national weather agency has issued the first warning.rouge“for extreme heat, warning of a”life riskThe Met Office said temperatures in southern England could top 40 degrees for the first time on Monday or Tuesday.

The British government was accused on Sunday of not taking the heatwave seriously, after resigned Prime Minister Boris Johnson walked out of a Downing Street crisis meeting on the issue, and his deputy Dominic Raab appeared delighted with the 40+ degree temperature for the first time. England.

National plan in the Netherlands

In the Netherlands, the Dutch Institute for Public Health and the Environment (RIVM) announced on Sunday a National Heat Plan and a smog alert effective from Monday throughout the country, forecasting a rise in temperatures in the coming days, until 35 degrees. on Monday in the south and up to 38 degrees in some places on Tuesday.

In other parts of the world, extreme temperatures have also sparked wildfires, particularly in northern Morocco, where one person died and half of the estimated 4,660 hectares affected went up in smoke, and in western Canada.