“Since the mid-1980s, melting has increased significantly”

In the light of the vast spaces of the Mont Blanc massif, Tête Rousse is only a very small glacier, barely visible under the snow: at the origin of a deadly catastrophe in 1892, it is nonetheless one of the most protected in the French Alps. . .

Located almost 3,200 meters above sea level in the “royal road“leading to the roof of Europe, it measures only a few hundred meters and is 65 meters thick. It therefore pales in comparison to the majestic giants of the Chamonix valley, such as the Mer de Glace or Argentière.

But Tête Rousse, like neighboring Taconnaz, is part of the “small handleof glaciers considered potentially dangerous for the populations settled downstream, according to specialist Christian Vincent.

France has about 550 glaciers (for about 200,000 worldwide) some of which are “disappear or collapse“due to global warming.

Under close surveillance of scientists

The two glaciologists from the Institute of Environmental Geosciences (IGE) in Grenoble, Christian Vincent and Olivier Gagliardini, arrived this hot July afternoon to supervise the burial of temperature sensors in the ice. 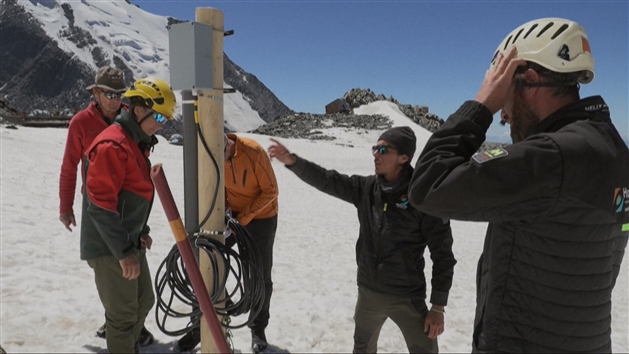 The process is not easy at this height where the devices can suffer from lightning strikes or landslides, underlines Mr. Gagliardini. The glacier, which is only accessible on foot or by helicopter, is near the infamous Goûter corridor, nicknamed “death row“for his numerous rockfall victims.

Paradox: a glacier would be cooling

This is not the case with the Tête Rousse moment, which, “paradoxically“, on the contrary it would be”cool down“Unlike others, it hasn’t even lost much thickness in recent years,” underlines Mr. Vincent, pointing to the snowy expanse where specialist crews are busy around drilling and pump platforms.

If the Taconnaz and Tête Rousse glaciers have in common a potential threat to the valley, they nevertheless represent two completely different scenarios: “Taconnaz is heating up and this one is cooling down, it seems completely contradictory and yet the origin is the same, it is the warming of the atmosphere“, emphasizes Christian Vincent.

The first is a cold glacier (less than zero degrees) suspended, which has seen its temperature increase and therefore runs the risk of becoming destabilized in the long term and causing ice avalanches.

The case of Tête Rousse, a glacier that is both warm (zero degrees) at the top and cold at the bottom, is more complex, with the formation of pockets of water that can descend below.

“We notice this very particular thermal regime, it perfectly explains the origin of the water bag. The melt water circulates and enters the glacier and is blocked by cold ice at the base.“, he explains, noting that this scenario is rare in the Alps.

If the models are confirmed, the glacier could eventually “become completely cold“, in which case scientists and public authorities could relax their vigilance, which has been constant since the alert was given in 2010.

The Tête Rousse glacier directly overlooks the city of Saint-Gervais-les-Bains, some 2,000 meters below, in particular the Fayet area, where the city’s thermal baths are located.

This is where an avalanche of liquid and rock debris caused by the rupture of a large body of water destroyed everything in its path in 1892, killing an estimated 200 people.

A similar catastrophe was narrowly averted in 2010 when a new pocket of water of some 55,000 cubic meters was detected inside Tête Rousse. Under pressure, this time he threatened some 3,000 people below.

The public authorities, alerted by scientists, organized an emergency pumping. But the water table was reformed the following year, then in 2012, leading to costly new oil changes.

Today, the danger is less but the glacier, lined with piezometers to measure pressure, scanned by radar and proton magnetic resonance, remains under close surveillance, especially since another cavity has been sighted in its upper part.

“Glaciers are an extremely valuable natural climate indicator, easy to measure and highly visible to the public.“, says Mr. Vincent.

However, it is generally necessary to avoid “shortcuts“and put everything on account of global warming,” he stresses, recalling that the falls of seracs (blocks of ice) are, for example, part of the “normal functioningfrom an ice cream parlor.

Studying them also allows us to understand the ice deformation processes and “rollerblading“glaciers in its bed, which provide valuable information about what could happen in Antarctica in the future”.Here is a phenomenal bet since it conditions the rise in sea level in the future.“, explains the glaciologist.